Interview with Gabriel AUVINET Professor at the University of Mexico, advisor for the construction of the NAICM Tell us about Mexico’s new airport : This is a major project as it is not simply an extension to the existing airport but a brand new airport that is to be built on a new site. In […]

Professor at the University of Mexico, advisor for the construction of the NAICM

Tell us about Mexico’s new airport :
This is a major project as it is not simply an extension to the existing airport but a brand new airport that is to be built on a new site. In the first phase that will be concluded in 2019, we are building three runways that are five kilometres long, as well as their access routes and aprons providing to the terminal, whose audacious architecture was designed by Norman Foster (the architect of the Millau viaduct, Aveyron, France). This phase of the project also includes the control tower and various installations.

What about the geotechnical characteristics of the site ?
The site is on the former Texcoco lake, which has been progressively dried out over centuries. The ground is composed of fine sediments of volcanic and alluvial origins. A stratigraphic cross section shows the existence of a thin surface layer of clay and silt materials that have been subjec ted to many cycles of saturation and drying out. Then a first very compressible layer of clay with a high water content (often over 400 %) is found, varying between 20 and 30 metres in thickness. This is followed by a more resistant layer that is a few metres thick, then alternating layers of soft clays and silty sands that have been studied up to a depth of 100 m. Several elements make this project particularly difficult.

The water table is practically at the surface and certain zones flood during the rainy season. The pumping of drinking water into the aquifers of the valley furthermore causes regional subsidence which, on the site perimeter, varies from 10 to 25 cm a year. Finally, the characteristics of the Mexican clays give rise to effects on the site that are very pronounced, as shown by the earthquakes of 1985 and the more recent ones of September 2017.

Can you describe the geotechnical study programme ?
This was a very ambitious programme. A lot of continuous coring samples were taken, and were completed by a large number of CPT dynamic cone tests to verify the continuity of the identifiable layers in the ground. In addition, CPTu and SPT (to determine the water contents) tests were carried out, as well as using a dilatometer. Special tests on-site requiring equipment such as a suspended probe also enabled the dynamic properties of the soil to be determined. For the inter polation between surveys, Geostatistics were used. May items of detection equipment were used to define the piezometric conditions of the soil and its deformations due to the regional sub sidence and during the various phases of the construction.

Did the Panda® light dynamic penetrometer play a role in this programme ?
A very special role was given to the Panda®: determining the thickness and the characteristics of the surface layer, which has an important role for the access of the earthmoving equipment as well as the design of the routes and runways. As shown by its profile (see illustration), this layer is often less than 70 cm thick. The Panda® also allows certain major surface geotechnical anomalies to be detected (former canals and dykes, material storage zones, etc.). Different companies have made use of this and to date, 435 Panda® surveys have been performed. The surveys were conducted most often up to a depth of 6 m with a 4 cm2 point. The economics of this simple means of exploration and its simplicity of use is a difficult to access zone were very appreciated. 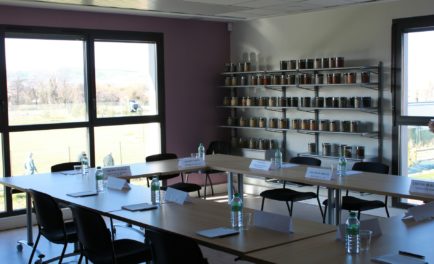 The next compaction control training sessions will take place at Sol Solution in Riom (63) on June 7...